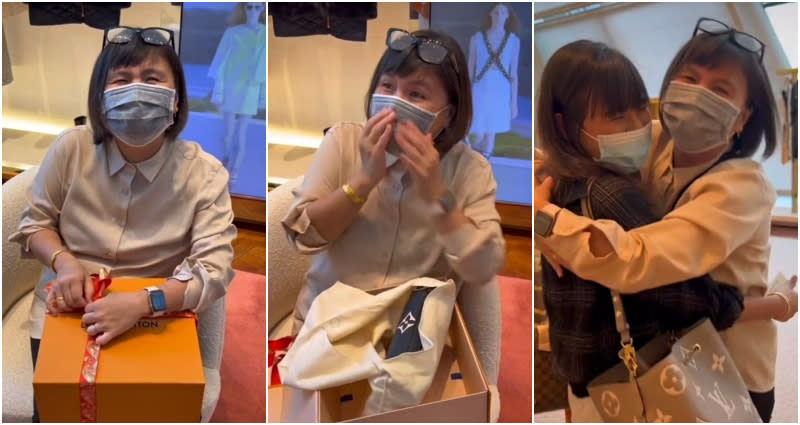 A woman in Singapore has shared a now-viral TikTok video of herself gifting her mother a Louis Vuitton bag she had laid eyes on but couldn’t afford 10 years ago.

User @minxchen took to the platform on Saturday to share her story, recalling how her mother pointed to the bag while they were window shopping a decade earlier.

An elementary school student at the time, she invited her mother into the store for a closer look, but the latter refused for some heartbreaking reason.

“She said ‘no’ because she didn’t look good enough to walk into the store,” @minxchen_ wrote. “I didn’t understand why.”

Still, @minxchen_ knew she never wanted her mom to feel that way again. Ten years later, she is the proud owner of a pastry company and finally able to buy the bag her mother wanted.

“I just know that I work really, really hard while in Poly and run my business from home because I never wanted them (my parents) to feel any other way again,” @minxchen_ wrote.

“I’ve grown so much along this journey and that’s why I’m here today. They were my pillar of strength in everything I do. I hope they are proud of me because I am so lucky to have the best parents.

@minxchen_’s TikTok video shows her mother opening her present right inside the store. After 10 long years, her mother enjoys not only holding the bag, but owning it.

The pair then kiss.

“Did it after a decade,” @minxchen_ wrote.

TikTok users showered the beloved girl with messages of praise and support.

“OMG! Her eyes and expression said it all. So lovely! Well done,” one wrote.

Another commented, “You will be so successful. Those who love their parents always do.

“Without all these gifts, I’m sure she’s already so proud of how far you’ve come as a person and your accomplishments. Happy for you,” another wrote.

Launceston Reception Prison officer allegedly used inmate’s clothes to mop up urine, then returned the clothes to him | The Examiner