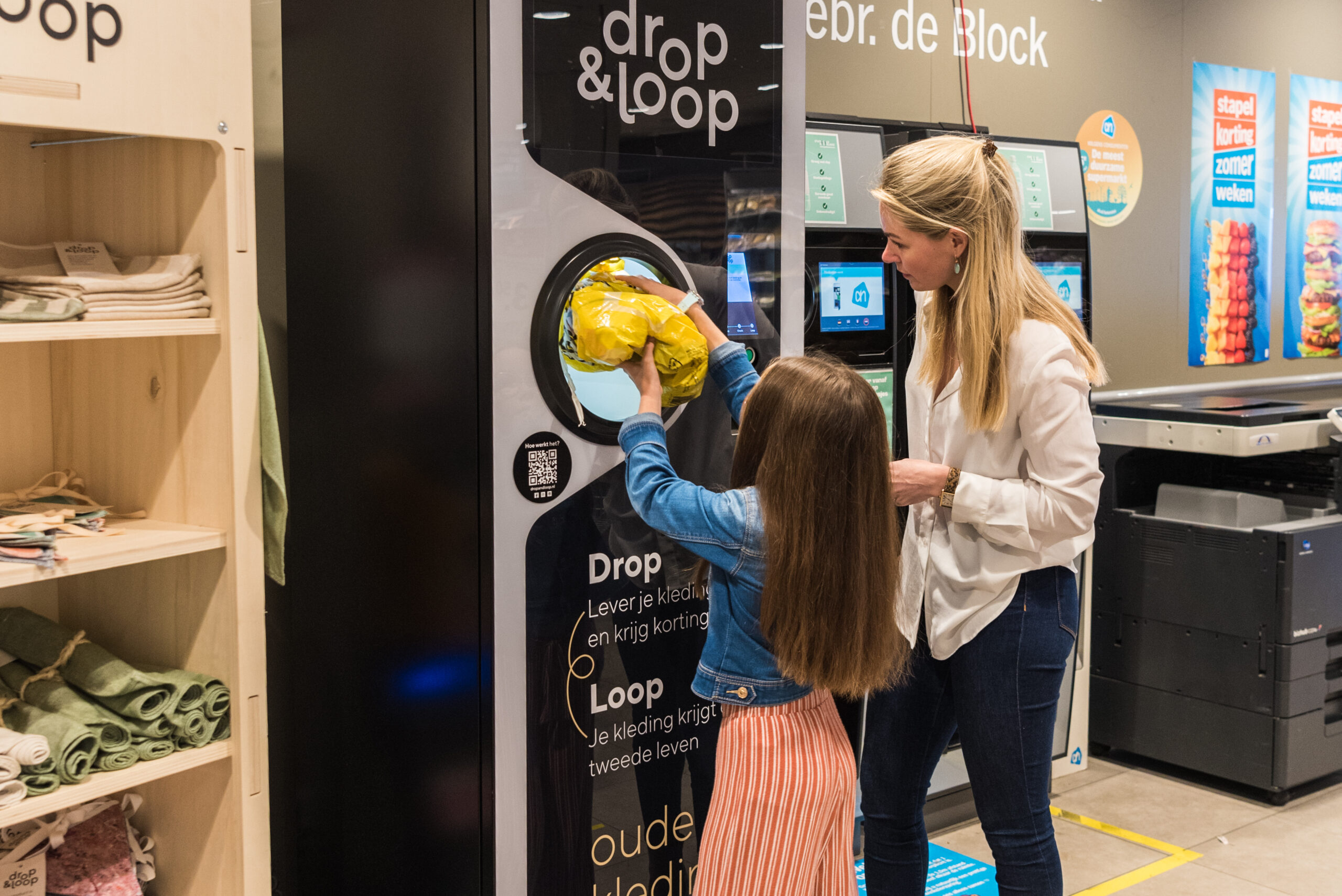 With the Drop & Loop dispenser, you recycle clothes as easily as returnable bottles

In addition to plastic bottles, you can also hand over your old clothes to a machine in some Dutch supermarkets. These garments are sorted and reused, and even the zippers should not be thrown away. Drop and Loop, founded in 2020 by Susan de Vries and Carlijn Oosthoek, already makes this possible at ten different locations in the Netherlands. Susan tells us more in this episode of the start-up of the day.

How exactly does this transfer work?

“You can compare it to a bottle dispenser for returnable bottles. Instead, it’s for textiles. We have machines where you can put all kinds of clothes and textiles. From belts to dresses and towels to soft toys. Even the quintessential deposit receipt is included in our service. As a thank you, you get a discount on your next purchase or you can save for a tea towel, for example. Together with our textile recycling partner Wolkat from Tilburg, we ensure that the clothes are then sorted. If it is still portable, it will be sold. Otherwise, Wolkat turns it into yarn, which is then used to make new fabrics. Zippers and buttons are removed and reused.

How did this idea come about?

“We both have a keen interest in the garment industry. When we discovered that 150 million kilos of clothing are burned each year in the Netherlands and that 60% of textiles are still thrown away with household waste, we immediately wanted to take action. We then worked together to further develop the idea and were able to run a pilot at Albert Heijn de Block in Krimpen aan den IJssel. It was a huge success.”

Reusing 1 kg of clothing saves 25 kg of CO2 according to a study carried out by INTEXTER.

Now that you have real hands-on machines, how did you handle that

“Sometimes you also have to be a little lucky. Just when we were looking for a builder, we came across someone at a show in Germany who had built something similar for a customer in the past. This idea had not been properly implemented at the time. As a result, he ended up with ten machines that were just collecting dust. These machines aren’t perfect, but they provide a good test for us. We are now well advanced in the process of developing new machines in collaboration with the VDL Group Eindhoven. These machines are a little more stable and can also weigh clothes.

Was it difficult to finance this idea?

“To be honest, no. We even had several suitors. I think it’s because the circular concept is really thriving. Maybe it also secretly helped that we’re both female. Well of course, you also need good partners and because the AH of Krimpen immediately believed in us, all kinds of doors opened up. Eventually we ended up with Wolkat as a partner, because we can learn a lot from their expertise and we work well together.

Where will you be in five years?

“So there should be a Drop & Loop in every city and town.”

“Okay, maybe not in Lutjebroek. But scaling is really our ambition. We also really believe it’s doable. Much interest has already been expressed in the new series of machines. Not only by consumers, but also by the stores themselves. This is essential, as recycling is becoming increasingly important. And recycling is really what we, along with Wolkat, are extremely good at, down to the last zipper.

You can read other episodes of the Start-up of the Day series here.