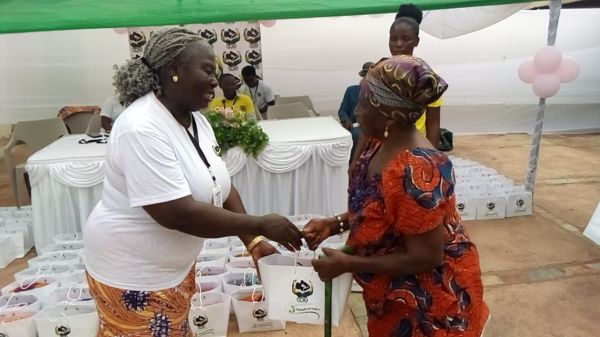 Adinkra Diaspora Women, a non-governmental organization which is headquartered in Denmark and includes Ghanaian women both at home and in the diaspora, has extended its support to widows, elderly and vulnerable people in Adukrom-Akuapem in the constituency of Okere in the Eastern Region through free health care. screening and donation of other basic necessities.

The screening exercise was aimed at diagnosing the individual condition regarding hepatitis B, high blood pressure and diabetes, after which the beneficiaries were given first aid medication and necessary recommendations or advice from the dietician and doctors.

Ms Sheila Ohene, a member of the organization from Denmark, said: “Adinkra was founded in Denmark three years ago and it is the third anniversary, so our vision in Ghana here is to help widows, people elderly, single mothers and daughters since they are the most vulnerable in our society”.

She therefore called on all Ghanaian women, both at home and abroad, to join the group to expand its support to many parts of the country.

On the other hand, the secretary of the organization, Mrs. Eugenia Malan, explained that the NGO having traveled to the Ashanti region and the central region to help women and the elderly in recent years, she finally decided to come to Adukrom-Akuapem since that is where the founder of the group Ivy Asare (Aka Akosua Papabi Gold) is from.

Dr. Nancy A. Gyamerah, a physician at Koforidua Central Hospital, urged churches to often offer their church platform to health workers to educate congregants, as the focus on their spiritual life makes them ignorant to pursue regular health care.

She pleaded with the beneficiaries to visit the hospital regularly to be diagnosed on hepatitis B, high blood pressure and diabetes as they are considered silent killer diseases.

Beneficiaries raved about the kindest gesture from the NGO Adinkra Diaspora Women, and touted the exercise as important in raising awareness about their health condition.