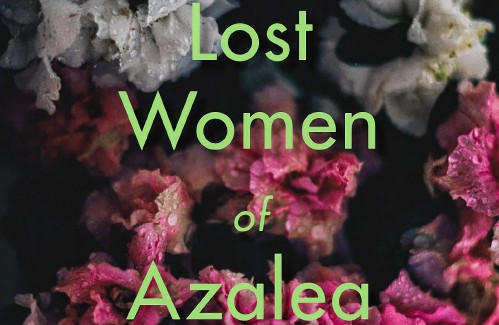 The Lost Women of the Court of Azalée

Northampton author Ellen Meeropol has used her first four novels to explore how a range of social and political issues, from the rise of the American security state in the aftermath of 9/11 to the divisiveness of the Vietnam War, happened in the lives of different people.

In her latest book, ‘The Lost Women of Azalea Court’, Meeropol drew on a chapter of local history – the former Northampton State Hospital – as the backdrop for a mystery that examines the secrets, lies and painful stories at the heart of a small group of families. The novel, set in Northampton, is also an examination of how society treats the mentally ill and the unpredictable ways people can come together.

Azalea Court is the fictional name for six bungalows, which were previously part of the staff quarters of the psychiatric hospital that once stood nearby. These six cottages, close together amid trees and gardens, are now occupied by six families, most of whom don’t have much interaction with each other, although some have lived there for years.

This changes when an elderly resident, Iris Blum, suddenly disappears. At first, it is suspected that Iris is the victim of rampant dementia: when the police are called, some of the neighbors recall that lately she had seemed distracted, even somewhat fearful, or “not herself”, as the one person said.

Her husband, Asher, now 94, was the state hospital’s last chief psychiatrist; he tells the cops that he had started treating Iris himself a few weeks earlier for a sudden onset of dementia. Lead Detective Sandra McPhee seems surprised that Asher hasn’t taken his wife to another doctor, but tells her that she and her fellow officers will do everything possible to find Iris.

But her research becomes a catalyst for the resentments, suspicions, pain, and troubled stories of the people of Azalea Court — especially the women — to begin to surface. Meeropol tells the story from the perspective of multiple characters, using short chapters that introduce new angles and perspectives to the story, which in turn serve to move it in unexpected directions.

There’s Evelyn, for example, who lives next door to the Blums and despises Asher. She once worked at the public hospital as a nurse, but was traumatized by an assault she suffered there, an assault she has long believed Asher covered up for her role as chief psychiatrist. . Now she suspects Asher of being behind his wife’s disappearance.

Another woman, by the Tolkien-inspired name Gandalf, is afraid to speak to the police and has always kept a distance from her neighbours; she has emotional and psychological scars from a brutal encounter years earlier with the Department of Homeland Security. (Gandalf is actually a character from one of Meeropol’s early novels, “On Hurricane Island”.)

Meeropol also introduces Lexi’s daughter, Asher and Iris, who lives elsewhere in Northampton and feels guilty for not spending more time with her mother. Gloria, a homeless woman who often parks her car near Azalea Court; and Aggie, who, along with her husband, has long felt ostracized in the neighborhood, perhaps because of her political beliefs.

These “lost women”, including Detective McPhee, will grow closer despite their differences as the search for Iris continues, revealing the personal stories they have hidden. Asher, meanwhile, reflects on the trauma he suffered during the Holocaust – he was the only survivor of his family – and wonders if that experience led him to make a series of mistakes as a older man.

Meeropol provides a backdrop to the horrors of institutionalized care at Northampton State Hospital – she used sources about the hospital for her novel – and how some women may have been locked up there simply because they were considered “difficult”.

Indeed, the women lost in the novel include those who lived their lives in the locked wards – and then were buried in the hospital cemetery. This legacy casts its own shadow over the events of Azalea Court, writes Meeropol: Cracks.

Ellen Meerepol is taking part in a number of public events in September related to the release of “The Lost Women of Azalea Court”, including a tour of the old public hospital. More details are available at ellenmeeropol.com/.

Israeli author Yishai Sarid attracted attention a few years ago with his novel “The Memory Monster,” which took a close look at the culture of Holocaust memory in Israel. The New York Times called it “a brilliant short novel that serves as a brave, sharp memoir against letting the past devour the present.”

Sarid’s new novel, ‘Victorious’, translated by Yardenne Greenspan (who also translated ‘The Memory Monster’), tackles another controversial subject: how the Israeli army hardens the men and women in its ranks into effective killers, and the toll people’s psyches take.

Like “The Memory Monster,” the new novel is published by Restless Books, the Amherst-New York press founded by writer Ilan Stavans, who teaches at Amherst College.

“Victorious” is narrated by Abigail, an Israeli army military psychologist who has spent her career performing seemingly disparate roles: helping soldiers deal with the trauma of war while showing commanders how they can transform those same troops into effective and resilient killers.

As the novel opens, Abigail, a single mother, faces a new reckoning. His sweet son, Shauli, is now eligible for the military draft and has decided to join an elite paratrooper unit, where the training will be intense and the danger of combat high. The boy’s father is a commander in chief of the Israeli army; Abigail has long insisted that he never reveal his connection to Shauli.

Abigail believes in her job – the ultimate goal of having well-adjusted soldiers is “to defeat the enemy”, she says – even though her aging father, also a psychologist, has long criticized her. “You have translated capitalism into military terms,” he says. “You don’t treat people. You are a servant of power.

Her father also notices that Abigail has developed warts and lesions on her fingers, a sure sign, he says, that her life is out of balance and that she is troubled by the contradictions in her job.

Abigail does not deny these contradictions. In one scene, she oversees a mock but brutally realistic interrogation of a young female helicopter pilot as part of her training, and the session ends with the woman urinating on herself. Abigail then comforts her; she’s determined that the female recruits be as tough as the men, but she also says of her job, “You break them down and then try to fix them… Like a psychopathic toy collector.”

As the military prepares for an unspecified “major operation,” Abigail’s loneliness, worries about her son, and some creeping doubts about her job begin to blur the line between her personal and professional life. Ordered to assess the mindset of a sniper unit that killed unidentified civilians, presumably Palestinians, she begins an affair with the unit’s young commander – who also holds his finger on the trigger of his gun as he shoots a man.

Sarid himself served in the IDF for several years, including as an intelligence officer, and he draws on that and a crisp, no-frills writing style to examine difficult issues of patriotism. , national identity and ongoing fighting in the Middle East.

“Israel recruits young people, almost children, 18 years old, and some of them have to go into combat units and kill,” the author said in an interview last year. “They are growing up like my children… They are no different from anyone else. You must train them to kill. It is both fascinating and tragic.

Steve Pfarrer can be contacted at [email protected]