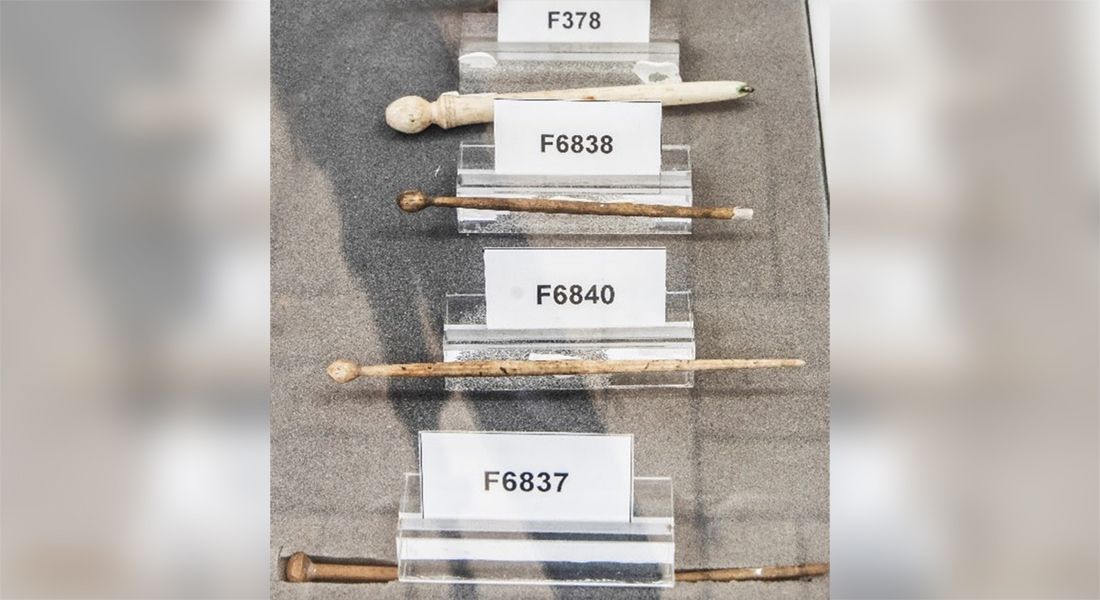 The (almost) 2000 year old hair accessories from the Folkestone Museum

Submitted to the Folkestone Herald

Made from animal bones, the four hairpins date from around AD 100-200 and were discovered at the site of the Folkestone Roman Villa by Samuel Winbolt in the 1920s.

Roman women grew their hair long and most wealthy women in the Empire copied the hairstyles of the women of the Imperial family in Rome which were reproduced on statuary and coinage.

Livia, the wife of Emperor Octavian Augustus (who reigned from 27 BC to 14 AD), wore a simple hairstyle consisting of a bun in the back and a curled piece in the front.

For example, the favorite hairstyle of Julia Flavia, daughter of Emperor Titus (reigned 79-81 AD) involved curling the hair with hot irons so that the curls neatly framed the face. The hair was then curled and pinned to the rest of the head.#

The hairstyle of Julia Domna, wife of Emperor Septimius Severus (reigned 193-211 AD) consisted of a middle parting, identical waves of hair framing each side of the face, and the rest pinned back

The traditional view (of male archaeologists) was that Julia Domna’s hairstyle was actually a wig, due to its intricacy, but there is no textual evidence to suggest this.

Indeed, Julia would have had access to the best hairdressers (called ornatrices) of the imperial house to help her create her style.

So why was hair so important? For the Romans, appearance was a visible marker of wealth and status; the way a woman wore her hair reflected her family’s position in society.

Thus, a complicated hairstyle signaled that the woman who wore it did not need to work; instead, she had enough wealth and enough time to spend hours on her appearance in order to maintain and improve her family’s social position.

This hairstyle and appearance was considered an important feminine virtue in Roman society was sometimes reflected on women’s tombstones or tombstones.

Sometimes these showed an aristocratic woman seated before a mirror and surrounded by female slaves whose job it was to dress her and get her ready to start the day.

This use of this type of female iconography would have had little to do with the preferences of the deceased but, again, was a form of visual shorthand to emphasize wealth, status and family.

Find out more about the Folkestone Museum collections here.

Get all the latest news, updates and things to do in your local InYourArea Feed.