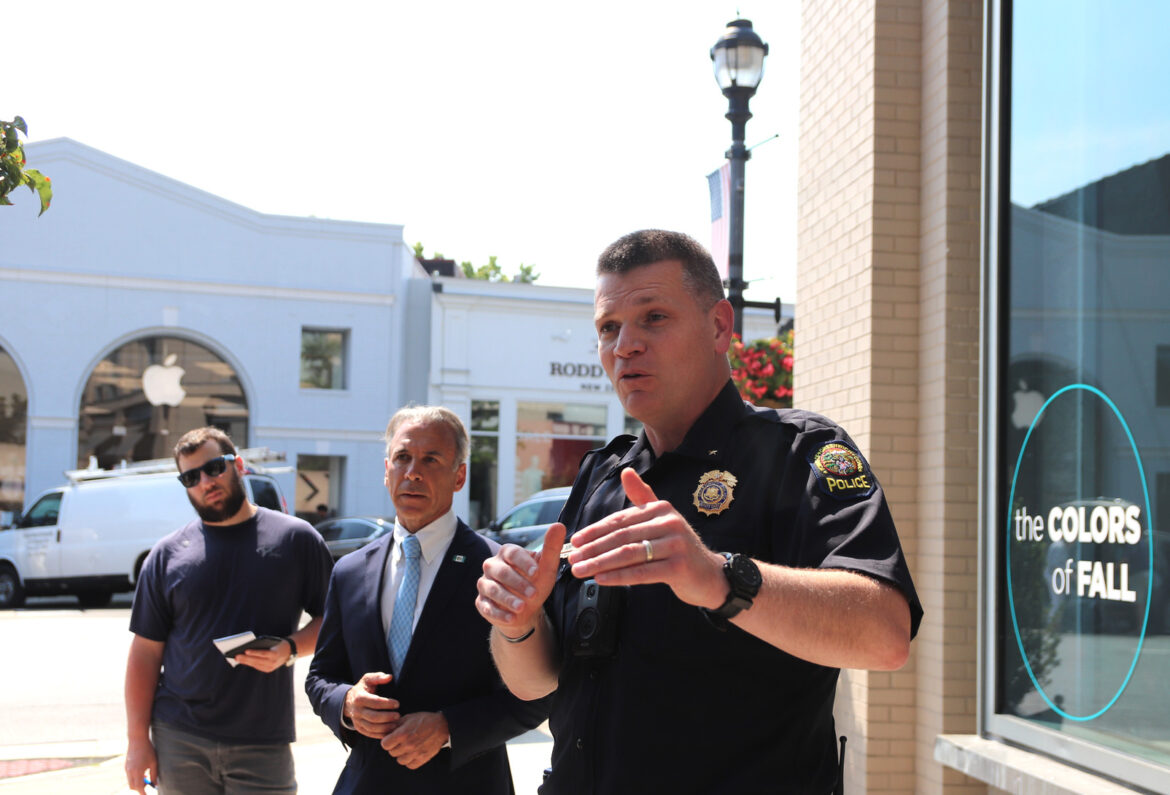 On Wednesday afternoon, first coach Fred Camillo and Greenwich Police met with reporters on Greenwich Ave to talk about policing and downtown safety.

Greenwich Police Deputy Chief Robert Berry, Bike Unit Officer Nick Carl and Foot Patrol Officer Nicholas Sarno attended. In the vicinity were two plainclothes officers, as well as an officer in car 45, which is assigned to the central business district.

The timing was remarkable, given a widely circulated video of a July 18 assault on a woman outside the Apple Store and a slew of arrests of suspects for fraudulent financial activity at branches. local banks.

Camillo said the video was misleading in that it was cut just before police arrived.

In fact, Deputy Chief Berry said an officer on a bicycle was one of the first on the scene.

Yet there is a view expressed on social media and in letters to the editor that when uniformed police directed traffic at Greenwich Avenue intersections, their presence had a deterrent effect on criminals.

He acknowledged the spike in arrests in the Greenwich Ave area, which are published in this outlet, but said it was not correlated to the lack of uniformed officers at intersections, but rather to the agile response bicycle police and civilian clothes. officers.

“We are now able to make arrests. If you look at our increasing arrests. It’s because they’re there,” Berry said.

“It would be an unsolved crime most of the time,” Officer Carl said. “They are being resolved now.”

“We’ve had robberies within 100 yards of officers directing traffic,” Berry said of the years when police were stationed at intersections directing traffic. “Because the criminals are out there watching, and they know (the police) are in the middle of the intersection and not going anywhere.”

Berry said when police were directing traffic, due to planning and having two or three intersections for staff, 5 to 6 officers were needed, six days a week, including a back-up on the rotation.

Berry said the attack on the woman exiting the Apple Store received a lot of attention.

But, he said, response times are faster.

“These guys are constantly cruising, up and down the avenue,” Berry said, pointing to Officer Carl next to his e-bike. “It widened the footprint beyond the two or three white circles in the middle of Greenwich Avenue. They can get on and off Greenwich Ave much faster, but also on surrounding streets. You will see them on Mason Street and Milbank Avenue. You will see them at the town hall and in the park. Their ability on these bikes to react to incidents is probably faster than Car Post 45.”

John Cooper, a pedestrian who joined the press conference, said he was a Call-A-Ride volunteer who drives seniors around downtown. He described seeing near misses with pedestrians.

Berry said that even 25 years ago, when he started his policing career in Greenwich, pedestrians did not obey the instructions of officers directing traffic.

“A lot of these other changes, including the physical construction of the road, with all the thousands of people walking these streets, there’s just no serious injury,” Berry said.

“Google ‘Bump outs’ and ‘Bump Outs that were ripped off’, because they don’t work,” Cooper said.

Camillo said: “These work. Bumps work. New London has just adopted Complete Streets, which is what we’re trying to do here. It’s much safer when you reduce the distance someone has to cross from side to side. You increase the sight lines and with the raised sidewalk you slow the cars down a bit.

The First Selectman said communities on Long Island and at least one city in Westchester have implemented similar improvements at intersections.

He said he was frustrated with comments on social media, including, for example, a comment that an officer directing traffic in Fawcett/Grigg was removed, but there was never an officer. stationed there.

“DPW has done traffic studies showing that most pedestrians were traveling between 4:00 p.m. and 6:00 p.m.,” Camillo added. “In fact, the last person who was hit was on Arch Street at Greenwich Avenue, right in front of an officer directing traffic. It was in January 2019.

“We know that because we’re safe, we’re even more of a target,” Camillo added. “We ask that you please be mindful of your immediate surroundings, do not leave your keys in the car.”

Camillo asked residents to join forces with the city’s fire, police and emergency medical services and do their part by being aware of the surroundings, locking their cars and bringing keys and items. of value inside.

Constable Carl said there were times when traffic backed up at a Greenwich Ave intersection and bike police stepped in to direct traffic.

“If there’s a need, we can go in there and clear traffic, but that tends to slow traffic down more,” he said. “You think you’re going to ease it, and then it tends to back it up more.”

“You can definitely feel an influx of new residents, but a lot of people are on the phone and a lot of people aren’t paying attention,” Constable Carl continued. “Pedestrians have the right of way, but they must be safe at the same time.”

As for the spike in arrests, Camillo blamed relaxed laws in New York state.

“They’re not just staying in New York,” he said. “That’s why, by having an additional presence here, we’re much more protected.”

Camillo pointed to laws on how long a minor can be detained, qualified immunity, and other instances of weakening the laws.

“Without public health and public safety, nothing else matters,” Camillo said. “What you see in New York isn’t helpful, but we’ll deal with it.”

A niqab and balloon shoes for a Moroccan basketball fan: the best photo of Mous Lamrabat | Photography