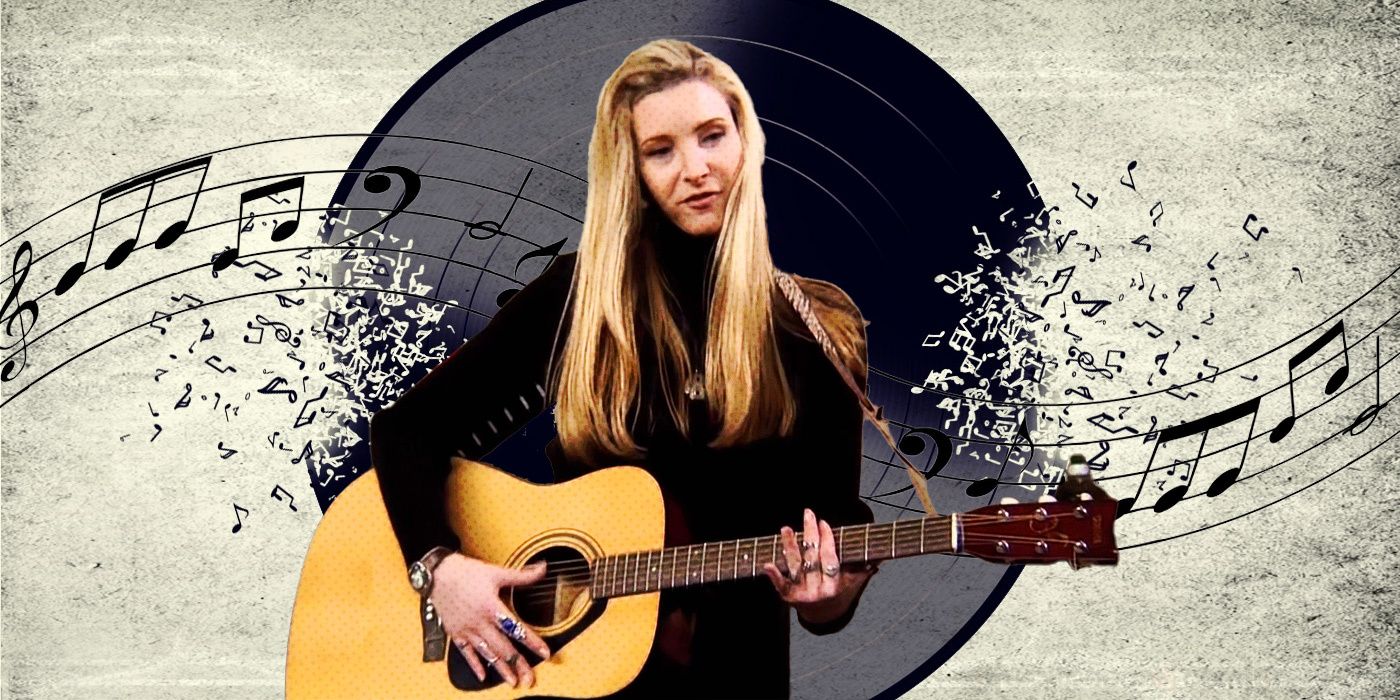 With over 50 songwriting endeavors under her belt, Phoebe Buffay (Lisa Kudrow) is certainly the musical talent of Friends gang. While none of the songs are quite Grammy-winning numbers, they manage to put a musical spin on almost any situation, and for that, they deserve some credit.

From the first episodes of Friends, we know two things about Phoebe – she’s a masseuse and a somewhat questionable singer. She is often seen taking the stage at Central Perk with one of her latest creations or performing an impromptu tune for her friends. And while the course of 10 seasons gave us an oddly wonderful array of lyrics, some just stood out a bit more than others. So, let’s take a look at some of Phoebe’s greatest hits.

After developing a cold, hence “sexy phlegm”, Phoebe’s singing voice reaches a whole new level. And “Sticky Shoes” never sounded better. The song about that unfortunate moment when you step into something “gross” in your favorite shoes is well received in its Central Perk performance. Although perhaps it was the addition of the sultry stroking of hair and the ad-libbing of the word “Baby” that took it up a notch from her usual rendition. This sexy voice has been such a hit that she’s doing everything she can to get it back. For example, kissing a sick Gunther (James Michael Tyler).

The start of the episode “The One with the Blackout” sees Phoebe on the Central Perk stage, guitar in hand, and ready to give the audience a song about that moment “when you suddenly realize what life is really about. “. However, a citywide power outage ensures we’ll never hear that. But who needs philosophical lyrics when she can just as easily utter lines like “milk is getting sour, but to me it’s not scary because I stay away from dairy”. Making the most of the blackout, she writes a song about it as the friends gather around the candlelight in Monica’s (Courtney Cox) apartment. By adding a “la la la la la”, it’s the perfect song without power.

Only Phoebe Buffay could turn the “lather, rinse, repeat” procedure of shower time into a catchy tune. Present in the episode “The one with the baby on the bus”, she presents this last number to Rachel (Jennifer Aniston). But when the manager of Central Perk hires a professional musician to replace Phoebe, it’s up to Rachel to break the news to her friend. However, like any good musician, Phoebe channels her frustration into song. “Terry is a jerk, and he won’t let me work, and I hate Central Perk,” she says angrily outside the cafe.

“The Cow in the Meadow”

If there is a song that will make us all vegetarians, it will be this one. This direct-to-kid musical offering from the Children’s Library about meat processing is one of Phoebe’s rarest thought-provoking numbers. Beginning as a sweet song about the cow in the meadow about to moo, it soon turns to the dark side. With the following lyrics being “Then the farmer hits him on the head and grinds him up, and that’s how you get burgers”, the parents watch in shock. It was the perfect song for vegetarian Phoebe to keep her style offbeat while spreading a strong message. And it is these frank words that are a big hit with the children, because they are later looking for “the woman who speaks the truth”.

The “Holiday Song” gives Phoebe one of her greatest lyrical enigmas. What rhymes with Rachel? Monica needs to have a “Happy Hanukkah”, Joey (Matt LeBlanc) Christmas must be “snowy,” but when it’s clear that Rachel’s name doesn’t rhyme with any holiday-related word, it leads Phoebe to reflect and hope that Rachel once had the nickname “Budolph.” After several versions of the song throughout the episode, she settles on her final version for her performance at the cafe. With the last line being “And Rachel and Chandler, haha ​​handler”, it becomes clear that some names just weren’t meant to rhyme holiday songs.

When the kids in the library learn that Central Perk is where “the lady who speaks the truth” sings, they rush to hear her latest candid offering. Cozying up with the band on the couch, they’re given another song lesson. This time it’s about sex. Telling kids that “sometimes men like women, sometimes men like men” starts out pretty simple. “Then there are the bisexuals, although some say they just make fun of themselves,” she continues singing, as a little boy watches Chandler (Matthew Perry) – another nod to the series joke of people thinking he’s gay.

“Two of them kissed last night”

“Two of Them Kissed Last Night” is inspired by the saga of Ross (David Schwimmer) and Rachel. It’s tucked away in the episode “The One with the List”, which sees the aftermath of Ross and Rachel’s kiss while in a relationship with Julie (Lauren Tom). As Ross struggles to make a decision between the two, Phoebe decides to provide a little musical help. Changing her name and emphasizing that “this story isn’t real,” she treats coffee and an uneasy Ross to this love triangle anthem. Rising to a crescendo ending in which “Neil” is told “he has to decide, he has to decide”, this is definitely one of his songs to inspire action. So, “Will Betty be the one he really loves, or will it be the one we call…Lulie?”

Although nervous about bringing her musical talents to the children’s ears because they’re actually “listening”, Phoebe takes heart and settles into her first song about grandparents. “Now grandma is someone everyone loves, she brought you a shiny train and bike,” she sings, as children and parents sway to the melodious melody. But it turns out that it’s not just a sweet song about Grandma, it’s actually a song about Grandma’s death. Soon the lyrics become increasingly harsh, ending with “The truth is she’s dead and one day you will be too.” But with the “la la la” to top it all off, she makes sure to soften the blow.

When it comes to Phoebe’s musical numbers, nothing is quite as iconic as that of the Smelly Smelly Cat (or in other words – “Smelly Cat”). With reprisals throughout the seasons, we’re treated to this little number in a number of ways, including a full-fledged music video. And this fan favorite even piques the interest of an ad agency when they want it as a jingle for their kitty litter ad. In an episode that sees a former singing partner return to the scene, this offer causes a bigger rift in their already shattered friendship. However, Phoebe certainly won’t sell out so easily and refuses to be a part of it. But the good news is that it inspires another song to add to his collection – “Jingle Bitch Screwed Me Over”.

Best of Bing: The 10 Best Episodes of Matthew Perry’s ‘Friends’

Rachel Salveta is a UK-based film and TV writer for Collider. She holds a master’s degree in journalism and has written for several national newspapers and magazines, including The Herald, The Sun, Take a Break and Chat. She loves a good 90s nostalgia as much as keeping up with all the latest releases.

Sign up to the Collider newsletter for exclusive news, features, streaming recommendations and more

Golf: Ervin aims for a medal in what could be his last outing before turning pro