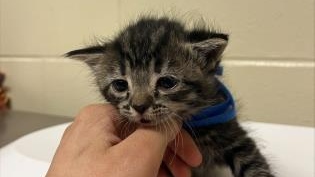 Police have arrested two people from Kitchener after live kittens were found in a garbage bag.

Waterloo Regional Police and provincial animal protection services began their animal cruelty investigation on March 28 when they said a community member made a discovery while walking through the neighborhood of Southdale.

Four live kittens were found tied up in a garbage bag, officials said, with another just next to the injured bag.

“Four kittens clearly belonged to the same litter and all were the same age,” said Calla James from the Humane Society of Kitchener Waterloo & Stratford Perth. “The other is currently being cared for by one of our medical team members. It appears the cat suffered some kind of hindquarter injury, we don’t know what caused it.”

Police say the person who found them took the kittens home and cared for them before the humane society responded.

On Saturday, police arrested a 37-year-old woman and a 41-year-old man from Kitchener in connection with the animal cruelty investigation.

The two were charged with causing distress and allowing the distress of an animal.

The kittens are all between seven and nine weeks old, healthy, in foster care and will eventually be available for adoption.

“They’re just going through that period until they get a little bigger when we can neuter them and then move on with adoptions,” James said.