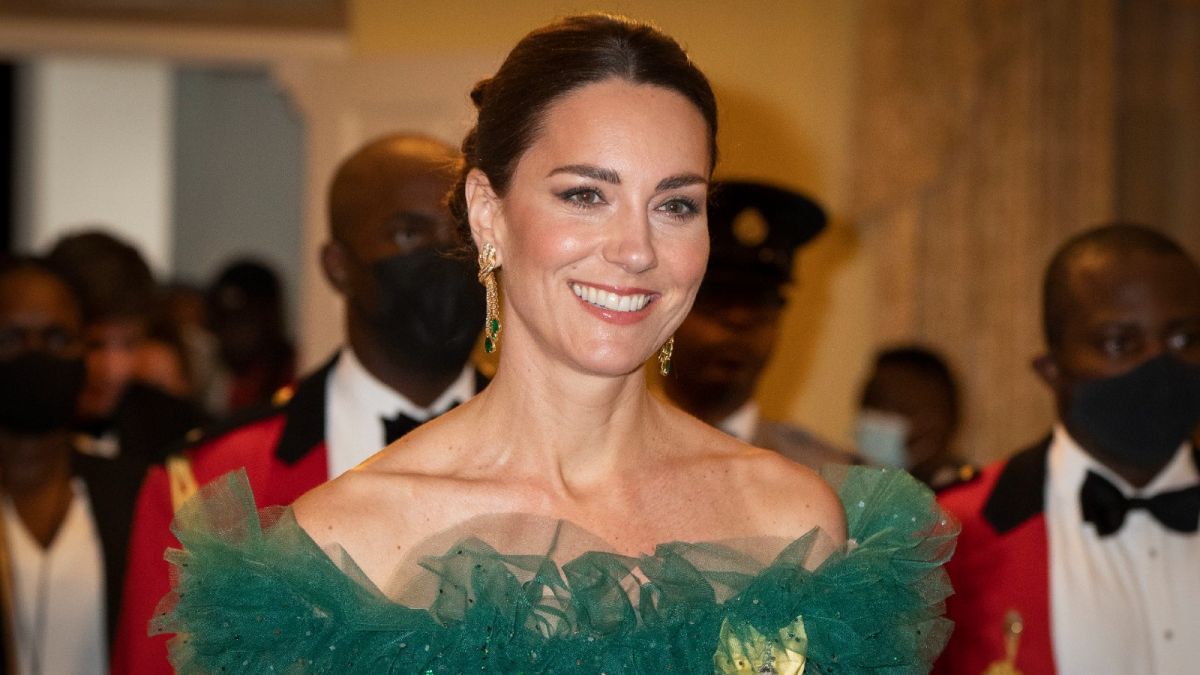 Kate Middleton’s green dress caught plenty of attention as the Duchess of Cambridge stunned in an off-the-shoulder Emerald Jenny Packham gown in Jamaica.

While a guest at the Governor General’s Dinner in Jamaica, the future Queen, the Duchess of Cambridge, looked stunning as she wore an off-the-shoulder ruffle dress by Jenny Packham.

Jenny Packham is one of the Duchess’ favorite designers and was the mastermind behind many of Kate Middleton’s dresses, including Kate’s iconic Bond dress which she wore to the 007 premiere which sparked deja vu of Princess Diana for royal fans.

This look also had a special meaning for the Duchess as it paid homage to her mother-in-law, the Queen. The diamond, emerald and gold encrusted drop earrings worn by the Duchess are part of the Queen’s emerald tassel adornment and have been seen on Her Majesty on various occasions.

These earrings are part of a matching set and have been paired by the Queen with a matching bracelet and necklace. The full ensemble was pictured on Her Majesty in 2011 when she met Barack and Michelle Obama at Winfield House.

The Duchess of Cambridge paid tribute to the Queen for a second time with this look as she wore a large yellow ribbon with a small brooch featuring a portrait of Her Majesty the Queen.

This brooch is said to be an honorary symbol of Catherine’s service to the Royal Family and was given to Kate by the Queen. These ribbons are called “Family Orders” and other members of the Royal Family, including Princess Diana, have already received them from the Queen.

Ribbons are usually only worn by female royals, and only on very special occasions, so it’s rare to see Kate wearing such an item to a royal engagement.

At this Governor General’s Dinner in Jamaica, Prince William spoke about “heinous” slavery during a speech and expressed his sadness as he discussed the “stain” this horrific event left on human history.

The royal couple’s Caribbean tour to celebrate the Queen’s Platinum Jubilee is not over yet. Prince William and Kate will soon be heading to the Bahamas where they will complete their trip and are due to depart on Saturday March 26.