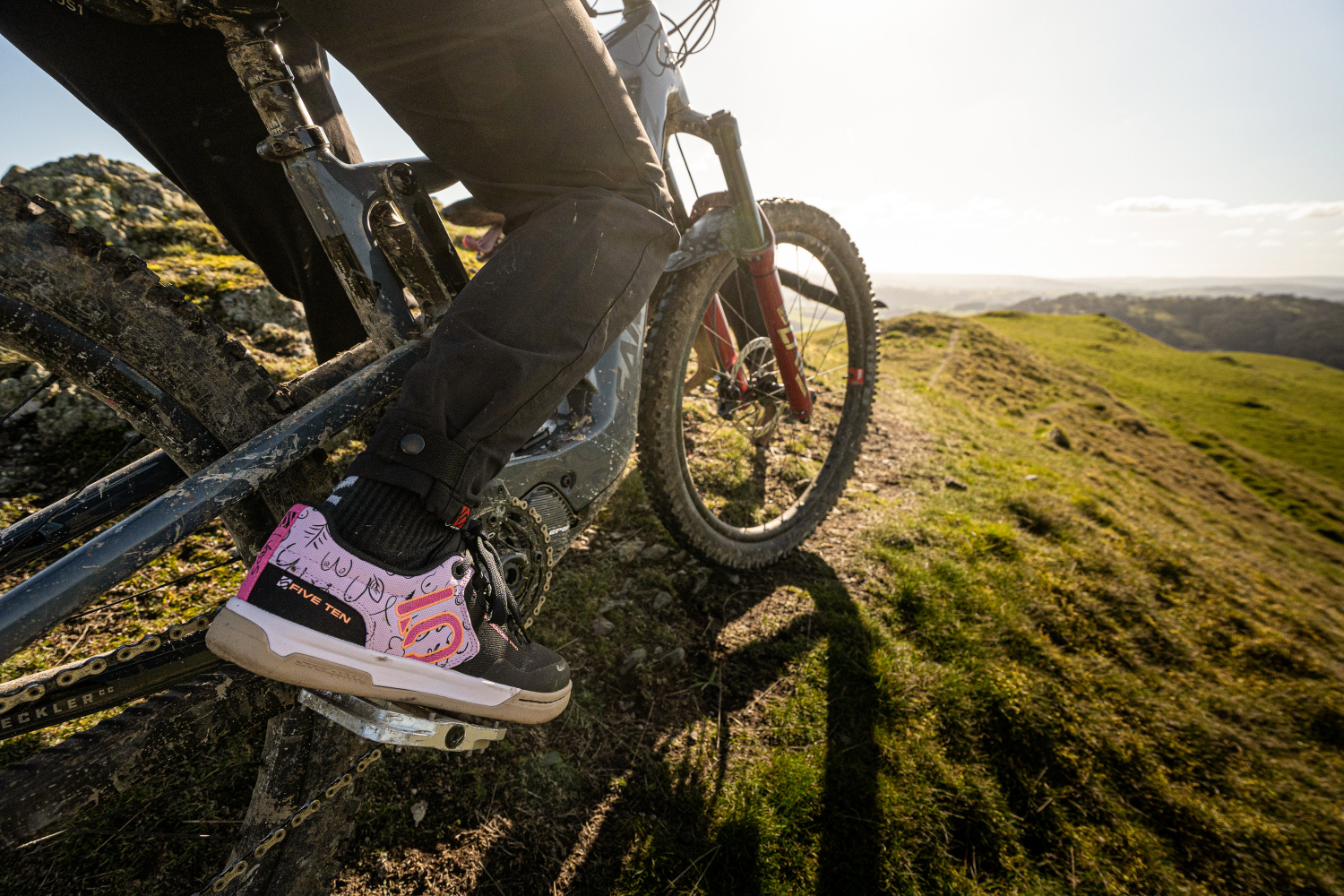 If you’re reading this, chances are breast cancer has impacted your life. Only one in eight women in the United States will develop breast cancer in her lifetime, so whether you’ve been diagnosed yourself or know someone who has it, the fallout affects us all. This year, the folks at Adidas are joining the fight to raise awareness and support with a limited edition of their most popular mountain bike shoe, the Five Ten Freerider Pro Canvas.

This new colorway combines all the cutting-edge features of the standard Pro model (grippy Stealth S1 outsoles, impact-resistant toes, durable synthetic uppers made from recycled ocean plastic) with eye-catching style, but the Freerider Pros are more than just a nice piece of equipment: it’s a pair of shoes with a story.

This particular story begins in 2010, when an avid mountain biker named Luke Hontz was offered his dream job as a bike project manager at Five Ten shoes. Hontz says biking was his biggest passion since he was a kid, but he never expected to have the chance to turn that passion into a career. Unfortunately for Hontz, her new professional honeymoon was short-lived: A few months after starting her new job, Hontz learned that her mother had been diagnosed with breast cancer.

“I was really shaken. I was in the midst of a new career, my dream job, helping to launch the Five Ten Bike business. Also, that first year, Five Ten was purchased by Adidas (2011 ), which added many more layers to my job title. I have traveled extensively to major cycling events, both in North America and Europe. I would never complain about anything, but that meant I was on the road rather than being with my mom.- Luke Hontz, Adidas Five Ten Senior Product Manager

Luckily for Luke, his mother is a fighter: Today, Susan Hontz lives cancer-free, and like many of the 3.8 million breast cancer survivors currently living in the United States, much of her success is due to early detection. According to the National Breast Cancer Foundation, 65% of breast cancer cases are diagnosed before they have time to spread to other parts of the body. Among these early detection cases, the relative survival rate in patients is encouraging at 99%.

Hontz says his mother’s experience inspired him to find a way to give back. He wanted to design something that would get people talking, which meant it had to be more than just a pink shoe. Hontz had worked with Vero Sandler, professional mountain biker and Five Ten athlete, on a previous project, and knew she was also a talented performer. When he approached her to collaborate on a design, the response was overwhelmingly positive.

Like many of us, Sandler had a close friend who had suffered from breast cancer and was happy to help. She spent the next few weeks talking with breast cancer survivors and found a common thread between them that ultimately inspired the lovely design you see here.

“Spending time in nature or thinking about nature has helped them stay positive through tough times,” says Sandler. “Some important people in my life have suffered from breast cancer. It’s important to raise awareness, and I’m thrilled to be involved in designing this collection.

Once the designs were complete, Hontz presented his proposal to the rest of the Adidas team. The result was so good that the company decided to launch a full line of Adidas shoes with BCA graphics, and included their Terrex Free Hiker and Agravic Ultras in the campaign, as well as the ever-popular Adidas Ultraboost running shoe.

Although we’ve tied a pink ribbon around Breast Cancer Awareness Month for the year, these new designs will be on sale throughout November. Adidas has pledged to donate $15 for every shoe sold to the National Breast Cancer Foundation or UK Breast Cancer Now, so whether you need to buy a new pair yourself or have someone active on your list races this year, they’re a great gift for a great cause.

The market for insoles or smart shoes is witnessing massive growth