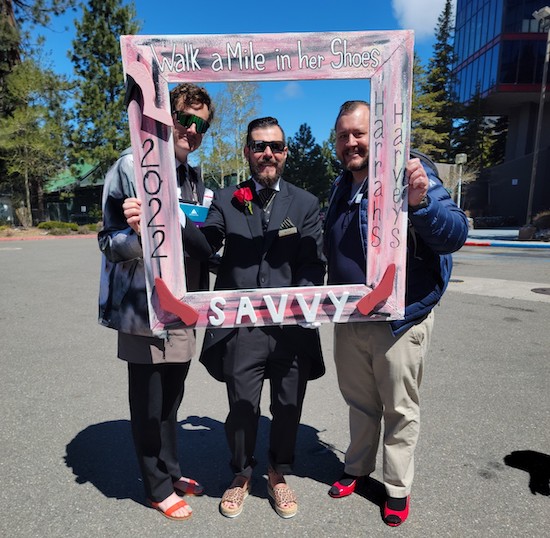 Male staffers from Caesars Entertainment, Harrah’s and Harveys took part in the first Walk a Mile in Her Shoes on the South Shore on Tuesday. The men donned high heels and walked a mile and a half down the hallway of the casino not only to raise money for Live Violence Free, but also to raise awareness about sexual assault, rape and gender-based violence.

Forty-two people participated, and among the non-staff members were a CalFire firefighter, local comedian Howie Nave and contractor The Service Company.

The goal is to make it an annual walk and fundraiser with its growing popularity and participation in the future. Organizer Mary Griego, head of regulatory compliance for Harrah’s and Harveys, said the rest of the community will be invited in the future.

Since some of the men walking had trouble finding high heels that fit them, knowing that there will be a second event next year, they have time to shop at thrift stores to find the right size!

The march was organized by Harrah’s and Harveys’ new business impact group, Savvy. It was created at Caesars in Las Vegas about 15 years ago to focus on women and their allies in the workplace. Savvy provides support, guidance and encouragement to women in the business and community. Savvy brings together women and women’s supporters at events aimed at fostering professional development, networking and empowerment.

Walk a Mile in Her Shoes was a march to end rape, sexual assault and gender-based violence. Men were encouraged to participate in the one mile walk in women’s shoes to promote awareness. This event benefited Live Violence Free in South Lake Tahoe. Participants paid to participate and collect donations for the non-profit – and the donation site will be live until the end of the day on Friday May 13 (SEE HERE).

Since 2001, men, women and their families from around the world have joined the award-winning Walk a Mile in Her Shoes®: The International Men’s March to End Rape, Sexual Assault and Gender-Based Violence. This is a unique opportunity to raise awareness in your community about the serious causes, effects and remedies of male sexual violence.

What are walk events?

Why do men wear women’s heels? The event asked men to walk in women’s high-heeled shoes to actively challenge gender stereotypes and expectations. In this space of playful and open confrontation, it is possible to reveal and examine many of the underlying causes of male sexual violence with less defensiveness and denial.

Why men in women’s shoes?

There’s an old adage, “You can’t understand another person’s experience until you walk a mile for them.” To get people listening, learning and talking, educational Walk a Mile in Her Shoes® events revolve around men literally walking a mile in women’s high-heeled shoes. It’s not easy to walk in these shoes, but it’s an experience around which a lot of education, self-reflection and change happens. It is impressive to see such a breathtaking public declaration of listening, learning, alliance and engagement. It is an engaging event that gets the community talking about sexual and gender bias, gender identity, gender relations and male sexual violence.

Prizes were awarded to participants in the following categories:

Best Team Representation: The Service Company, won a Nevada Basket from the Chocolate Shoppe in Gardnerville