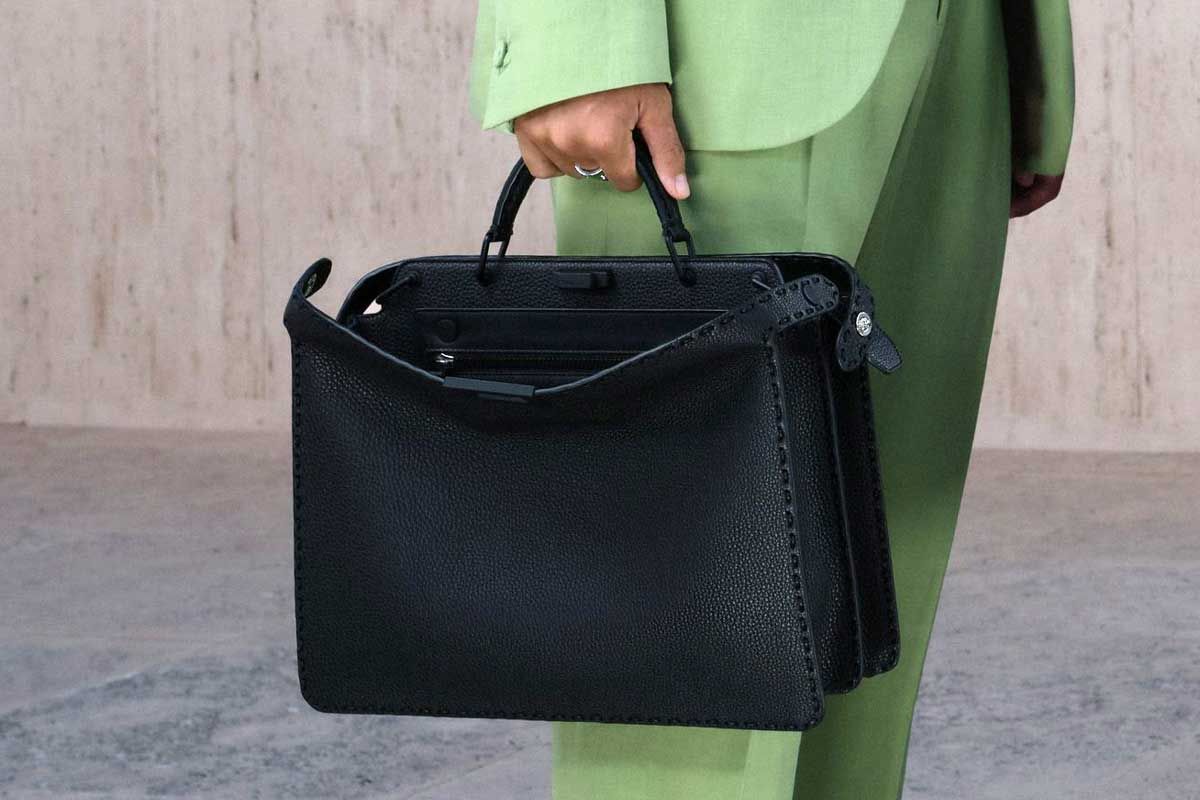 Although originally referred to as a women’s bag, the Peekaboo transcends gender. Its Spring/Summer 2022 collection includes offerings for both men and women, with a few key facets that bring a few variations closer to a true men’s accessory. Really, however, the Peekaboo is for everyone.

The Peekaboo’s name comes from the hidden internal “face” that is only revealed when the bag is unlocked, a silent reference to the children’s game of the same name.

This transformation is perhaps the clearest reflection of the bag’s clever construction, which comes down to the stitching.

Rich in detail that cannot be seen by studying photos alone, the Peekaboo deserves closer examination. So Highsnobiety sat down with Fendi’s design team to peel back the sumptuous layers of the Peekaboo and dive into the bag’s craftsmanship.

We started with a look at some of the seasonal materials applied to the ISeeU Peekaboo, a more angular and compact Peekaboo that debuted on the Fall/Winter 2020 runway as both a men’s and women’s bag.

Specifically, for SS22, the Peekaboo ISeeU has been reinvented with Econyl, an eco-friendly regenerated nylon. Don’t get me wrong though, these bags are just as luxurious as the classic Peekaboo bags.

Fendi’s design team selected pale hues to best complement the SS22 ready-to-wear, simultaneously highlighting the matte finish of the Econyl which is an understated counterpart to the silver hardware.

The medium and mini Peekaboo ISeeU bags were also released in a classic grained leather tinted an earthy hue to match the beige pattern of the ready-to-wear.

Like all of Fendi’s leather Peekaboos, these iterations are finished with what the design team calls “Selleria Macro Stitching.”

“It’s a thicker special waxed thread sewn by hand in Selleria’s signature process,” they said. “On the men’s side, a tone-on-tone yarn is used on the body of the bag, resulting in an elegant design.”

“Cuoio Romano”, which literally translates to “Roman leather”, is the designation of an exclusive Fendi manufacture.

It’s a type of “natural leather exclusive to FENDI, always used on our highest products,” the design team continued. “The name is a tribute to the Roman origins of FENDI, used from the beginning locally to manufacture leather equestrian accessories (like the Selleria sewing technique).”

With that in mind, it’s not unfair to view the Peekaboo as a living monument to Fendi’s legacy, reiterated for the present day. I see you, hello.

The top accessories for spring/summer 2022, according to the world’s best buyers