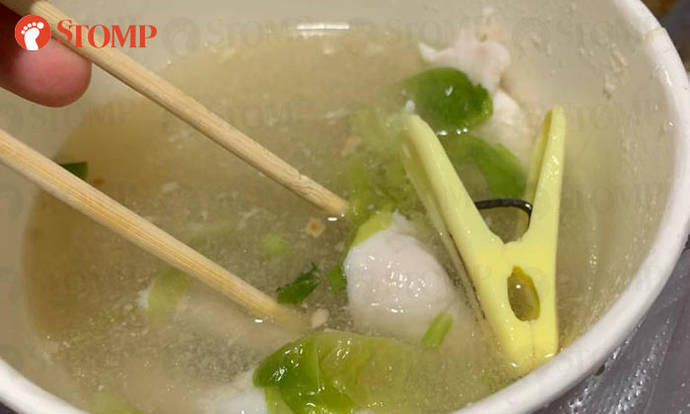 A family was alarmed when they found a ‘rusty’ clothespin in a bowl of fish soup as they were halfway through their dinner.

Trampler Sat shared with Stomp that his parents brought home some fish soup from a stall named Yu Pan at block 101 Yishun Avenue 5 on Monday, August 29 around 7 p.m.

He said: “We were happy to have dinner when suddenly, to our surprise, we found this rusty plastic clothespin in the soup!”

“Dinner became a nightmare for us as we were worried about food poisoning due to rust on the ankle.

“With this, I urge the public to see what their food consists of before they start consuming their food.”

Sam added that he posted a message about the incident on the stand’s Facebook page the same day.

However, he couldn’t find their page the next day.

“Now I can’t find their Facebook page and the review I wrote has become a feed on my profile,” he said.

“They probably blocked my account from accessing their page.

“Although humans make mistakes, I think we have to be very careful when we eat at the same time.”

Sam has since reported the matter to the SFA.

In response to a query from Stomp, an SFA spokesperson said: “The SFA has received comments and is investigating the matter.

“Food safety is a shared responsibility.

“As the SFA puts in place and enforces regulatory measures, food operators must play their part in adhering to good food hygiene and preparation practices.

“Members of the public who encounter a potentially wandering food operator should report it to the SFA via the online feedback form (www.sfa.gov.sg/feedback).

“As part of the investigation and collection of evidence, the SFA may engage the comment provider for further details.

“The SFA will not hesitate to take enforcement action against errant food handlers if we have obtained sufficient evidence.”

In a similar incident, a woman found a wooden peg in her meal at the Kimly Seafood stall in Gangsa Road on August 9.